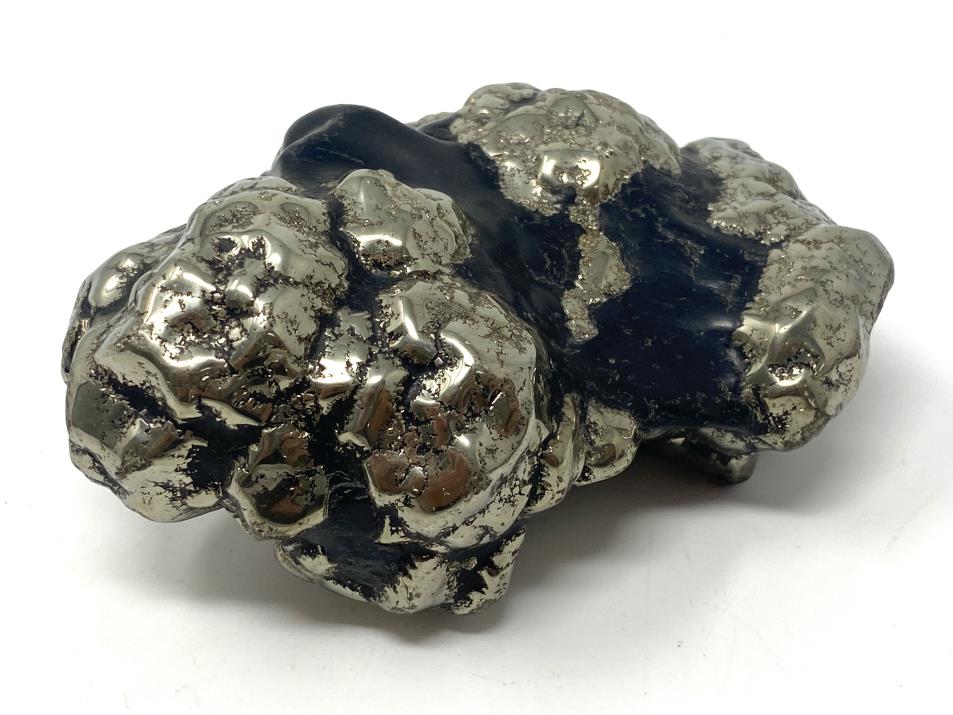 Iron Pyrite is one of the oldest, most famous stones known to man, and we at Madagascan Direct are excited to share with you a newly sourced, rare form of Pyrite.

Pyrite is known to shimmer and shine with gorgeous golden hues which reflect like a mirror, but this new Pyrite variety also displays grape-like clusters of gold in a spectacularly tactile, natural botryoidal crystal shape.

These metallic golds contrast against a stunning backdrop of jet-black Magnetite, creating a marvellous tapestry of colour.

Although similar to the revered Healer's Gold from Arizona, this Pyrite variety is truly one of a kind because of its striking botryoidal shape.

So, let's learn more about why this mineral is so exciting!

What Is Pyrite Made Of? 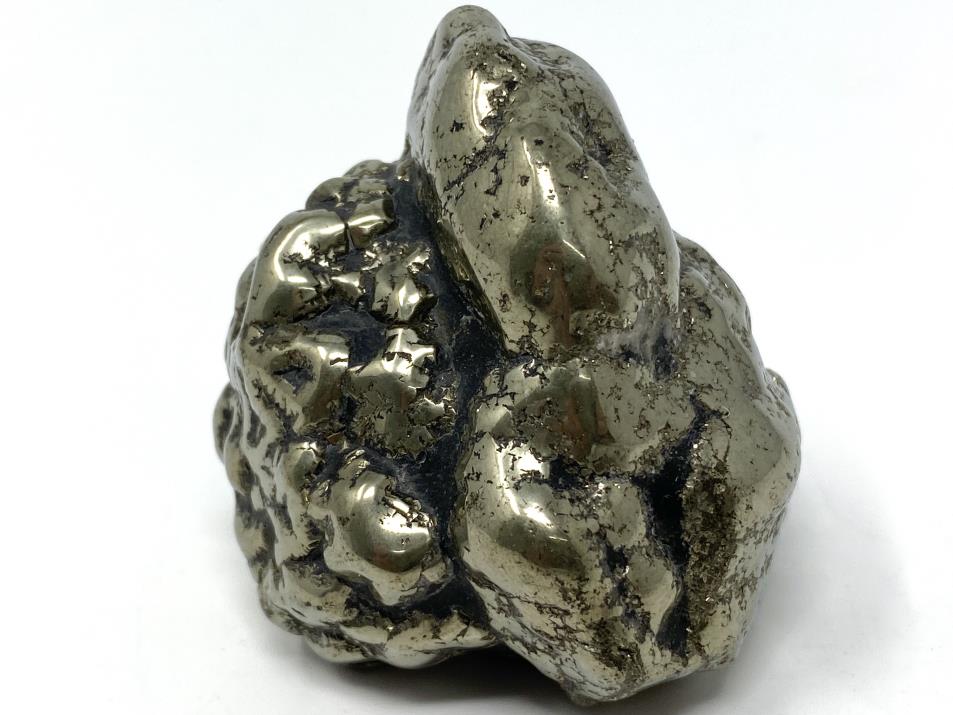 This mineral is composed of iron and sulphur, and is therefore classed as an iron sulphide/ iron sulfide: this is why it is sometimes called Iron Pyrite.

Pyrite is often mistaken for gold due to its golden colouring and tendency to be found in the same rocks as gold: Fool's Gold is thus a term that has been given to Pyrite.

Containing Pyrite and Magnetite, this new, rare form of Botryoidal Pyrite is very similar in composition and appearance to the revered Healer's Gold, which is otherwise known as Apache Gold. 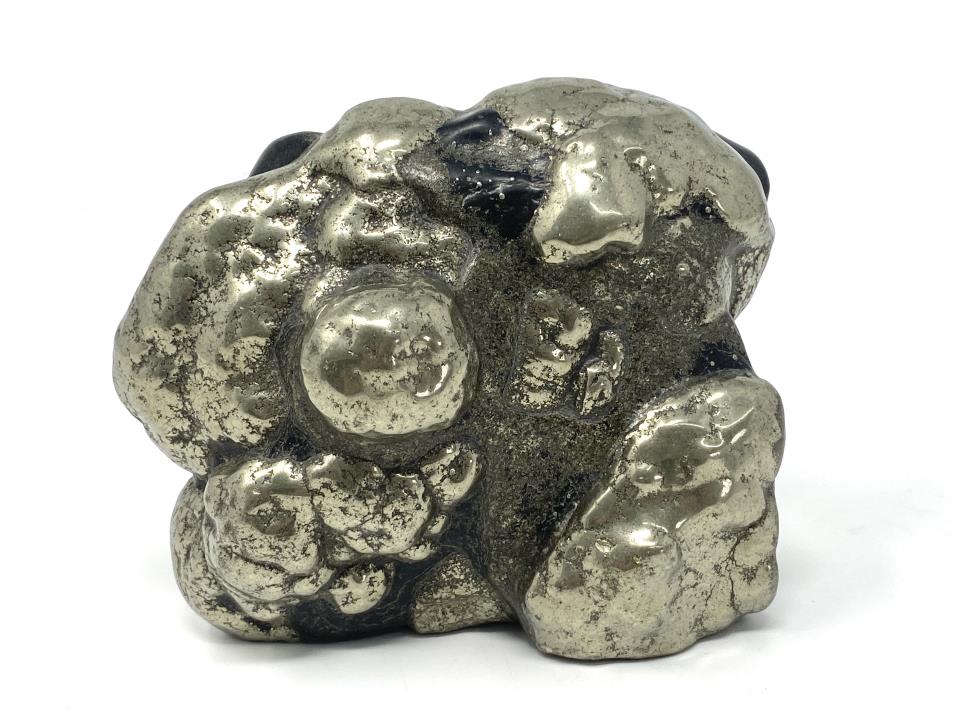 Iron Pyrite most commonly forms in a cubic crystal habit, however this new form of Pyrite displays an unusual botryoidal crystal habit.

A crystal habit describes the overall trend of growth of crystals in a crystal cluster: in a cubic crystal habit, crystals tend to form mainly in cube shapes.

However, in a botryoidal crystal habit, crystals tend to form in globular, spherical patterns similar in appearance to a cluster of grapes.

The botryoidal crystal habit is common to stones such as Malachite and Chrysocolla, but is rarely seen in Pyrite: making these Botryoidal Pyrite specimens very rare.

Where Does Pyrite Come From? 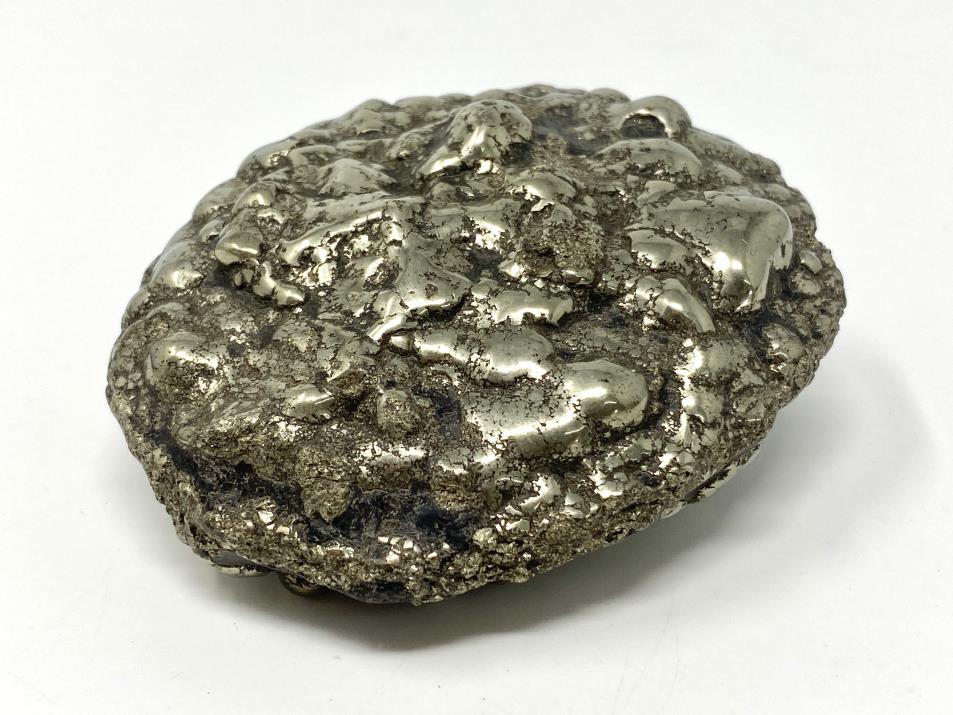 Pyrite forms in locations all around the globe, however this new form of Botryoidal Pyrite was sourced from Africa.

Since Pyrite can be found in various guises all over the world, it is not a surprise to discover that Pyrite has historically been used by many different cultures and civilisations for a range of different purposes.

What Is Pyrite Used For? 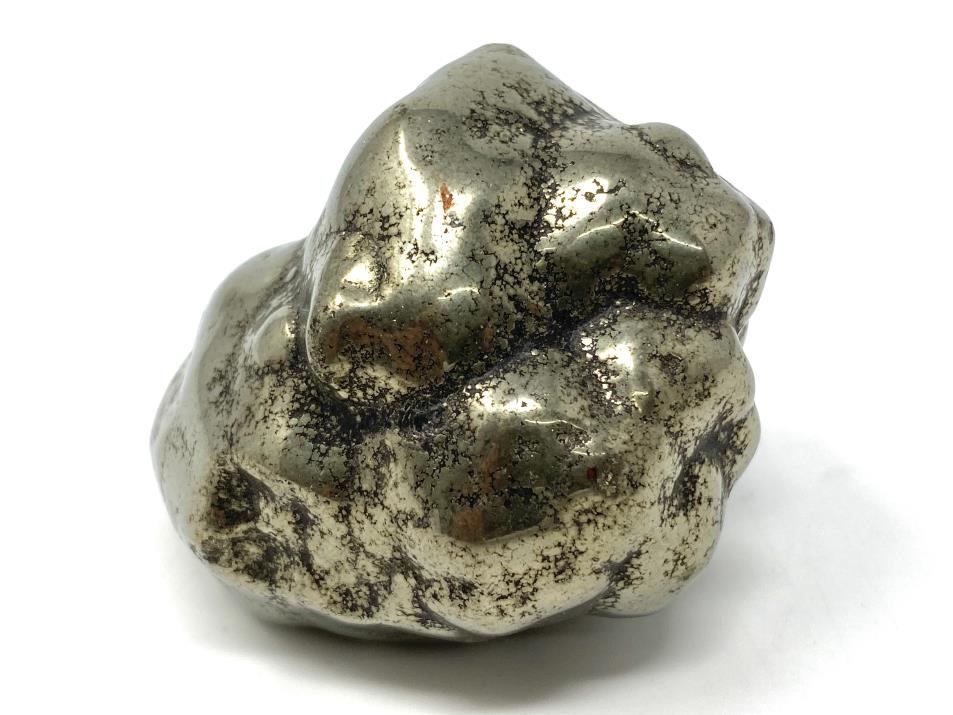 Pyrite's many uses, both past and present, span the gamut from industrial use as an important sulphur and iron ore, to cultural, aesthetic, and spiritual use in mineral collecting, decoration, and crystal healing.

One famous use of Pyrite is in Marcasite Jewellery: although the name of this jewellery suggests it is made of the mineral Marcasite, it is in fact made from Pyrite, which is similar in composition but much more stable, ensuring it can be cut and polished into gemstones. 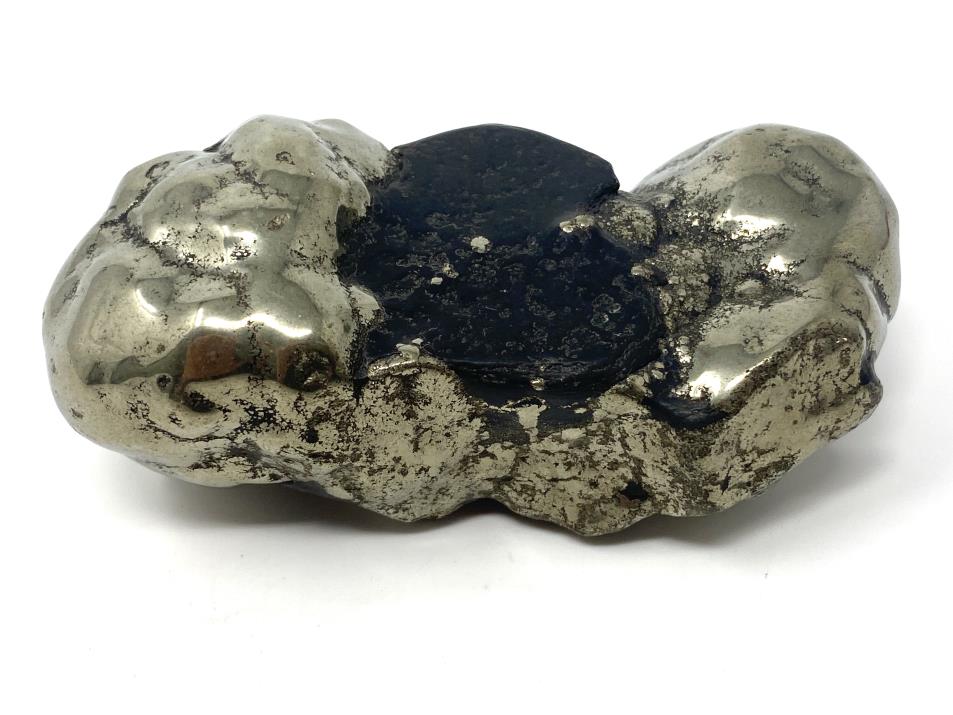 Pyrite was widely used in Ancient Mesoamerica, where the Mayans polished it to create mirrors. The reflective nature of the stone's surface ensured it was perfect for this role.

The name for this stone was derived from the Greek word for fire ('Pyros'), and Pyrite was thus named because when struck against a hard surface or another Pyrite specimen, it gives off sparks.

This mineral has been found in Pre-Historic Burial Mounds, indicating that ancient humans used Pyrite to ignite fires. 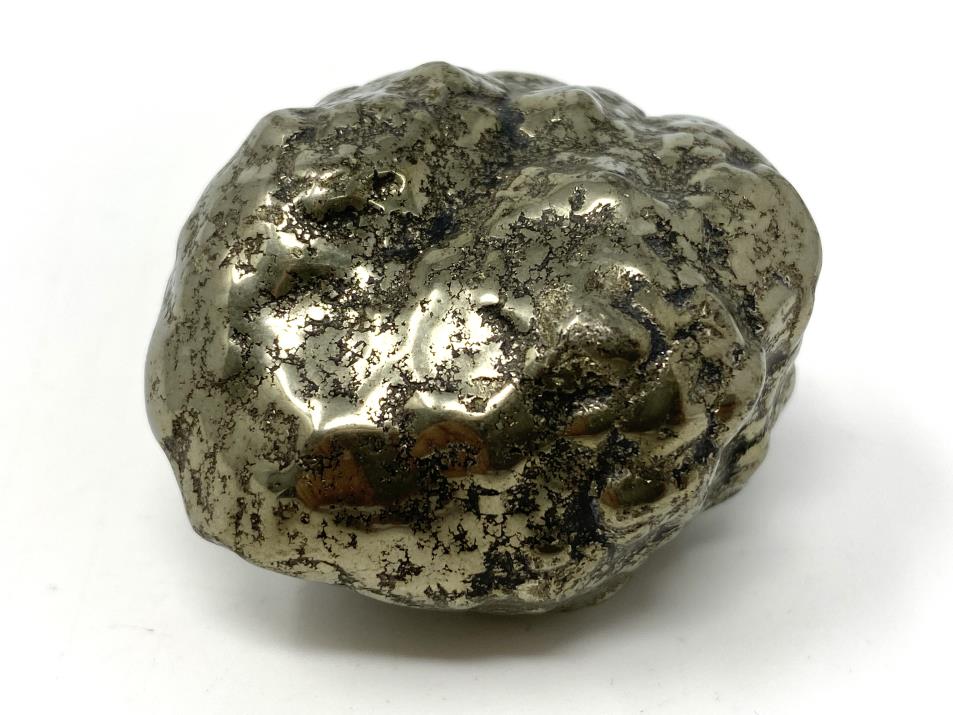 In the past, Pyrite was an important ore for sulfur.

Although less commonly used nowadays as a sulfur ore, rocks containing Pyrite are still mined today as a way of procuring gold, which sometimes grows next to this mineral.

Iron Pyrite also used to be an important iron ore, however it is now only used as a minor ore for iron because of the difficulty in extracting iron from it in comparison to other ores.

Major iron ores today are now usually Hematite or Magnetite based, as iron oxide materials such as these are easier to process and extract iron from. 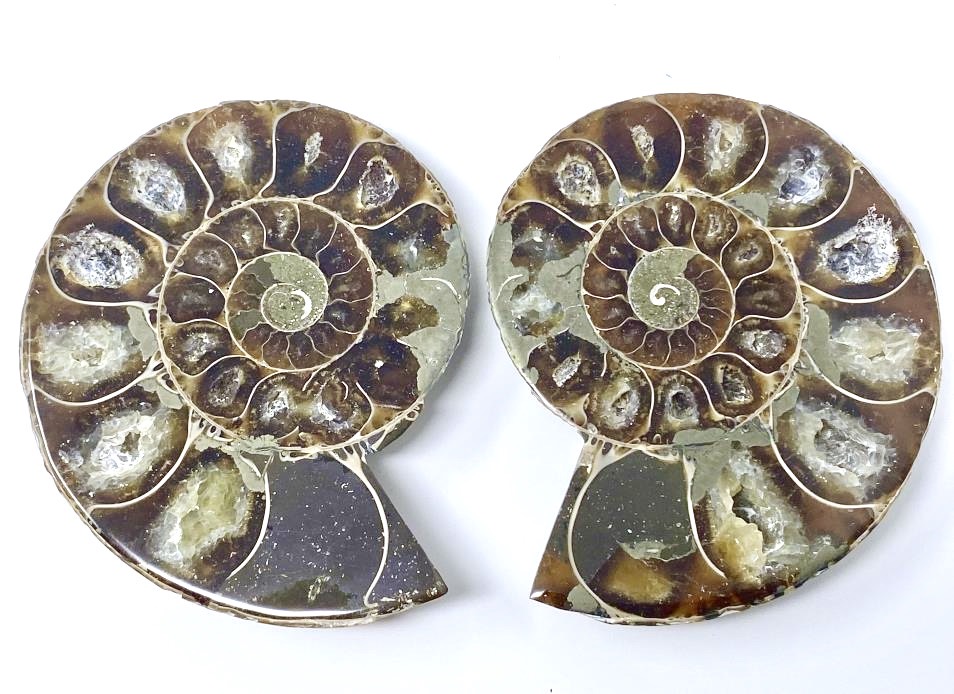 Pyrite can sometimes be seen in the shells of fossils, such as ammonites: but why does this happen?

In summary, it's all about chemicals!

Pyrite, as an iron sulphide, needs iron and sulphur to form, and can only form when there is little oxygen available in the environment: these chemical conditions co-incidentally are also created during the decomposition of organic material.

During the fossilisation process of ammonites, these sea creatures died, and during their decay, the organic material in their shells was slowly replaced by other minerals present in the sediment where the remains were.

As Pyrite forms during the decomposition process, Pyrite was often a mineral that replaced the organic material of their shells.

Pyrite As A Secondary Mineral 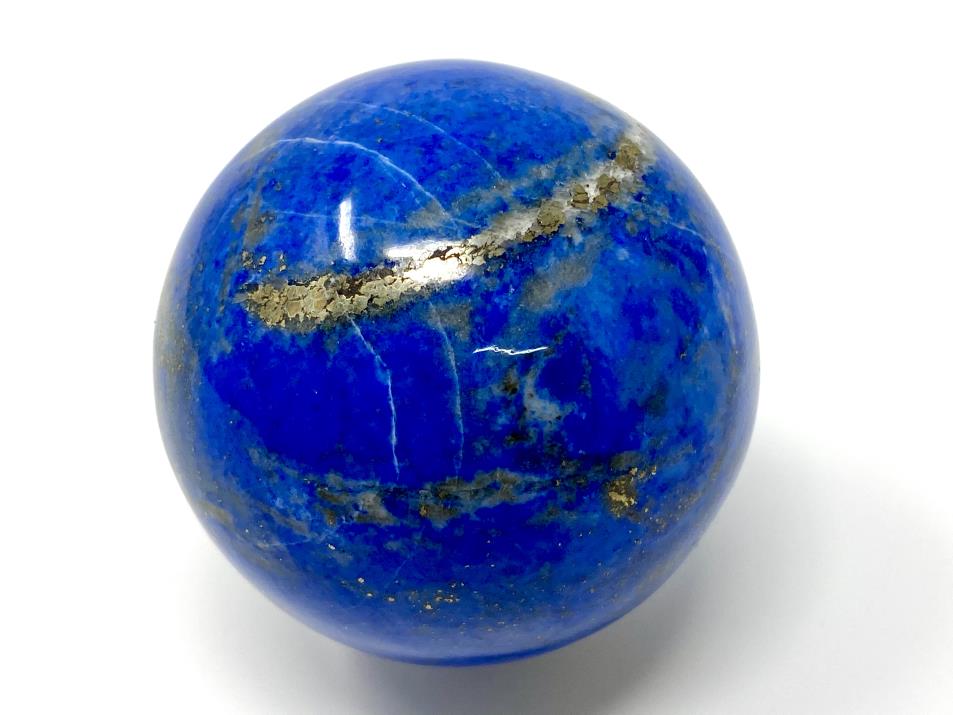 Pyrite often also occurs as a secondary mineral in many other minerals: most notably, Lapis Lazuli.

The inclusion of Pyrite in Lapis Lazuli, with its celestial gold colouring, is often said to increase the beauty of this royal-blue mineral. 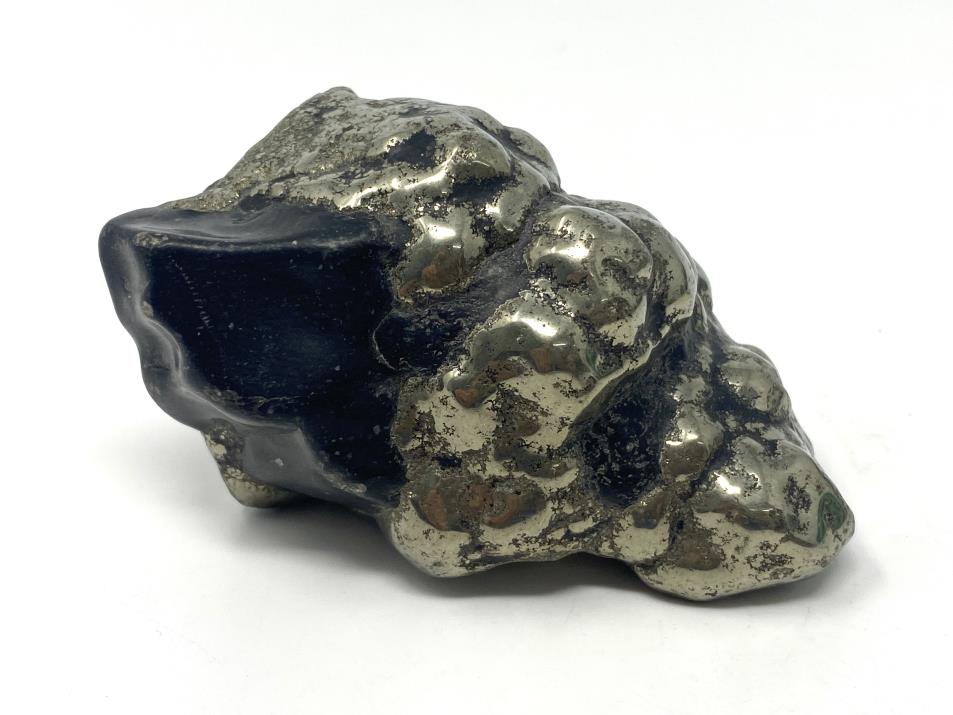 Crystal healers believe that Pyrite's connection to fire (its ability to create sparks) gives it an intense fiery energy that gifts its user with determination and vitality.

A stone for warriors, this mineral is said to ignite one's bravery and to encourage prosperity and will-power in its user.

If looking for crystals to boost confidence, Pyrite is the perfect stone for you.

This special stone is also believed to be an excellent stress relieving crystal: it protects its user and helps them to feel safe and secure by improving their self-esteem. 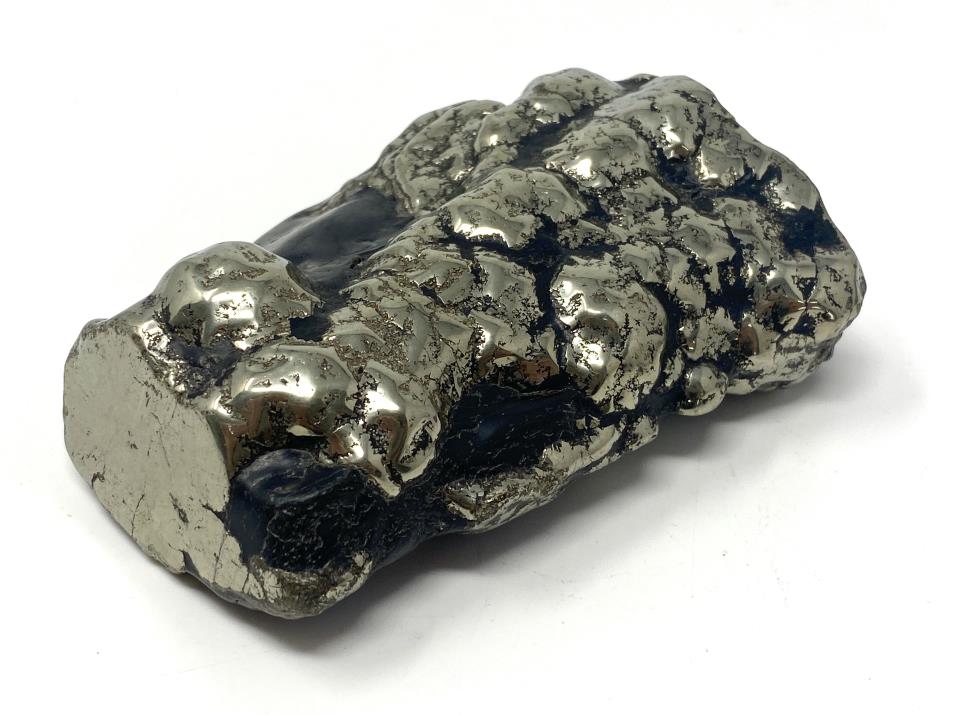 Pyrite is said to be most powerful when used with the Solar Plexus Chakra: this chakra is the centre of determination and an iron will, meaning Pyrite is fantastic for enhancing personal power and assertiveness.

When used with this chakra, Pyrite is incredibly energising, like the fire energy it represents and the gold, sunny colour it exudes.

Many crystal healers believe that Pyrite strongly embodies masculine energy, and can be the perfect yin to the yang of feminine energy stones such as Moonstone.

Pyrite, and Healer's Gold, can also be used with the Root Chakra to gain a sense of grounding and protection: this spiritual practice goes all the way back to times when Pyrite was used as an amulet to ward off evil spirits.

How Hard Is Pyrite? 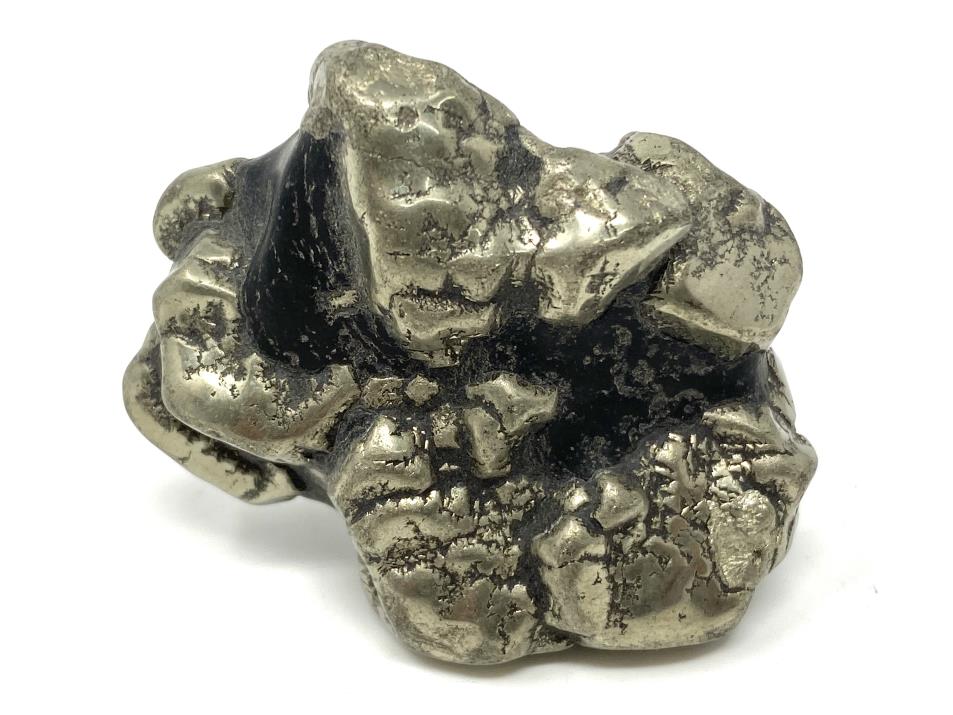 Pyrite measures 6 on the Mohs scale of mineral hardness, meaning it is a relatively hard and durable stone, but care should still be taken not to damage the surface.

Please ensure you take care of your Pyrite crystal by regularly cleaning it under lukewarm water and carefully drying it with soft fabric. 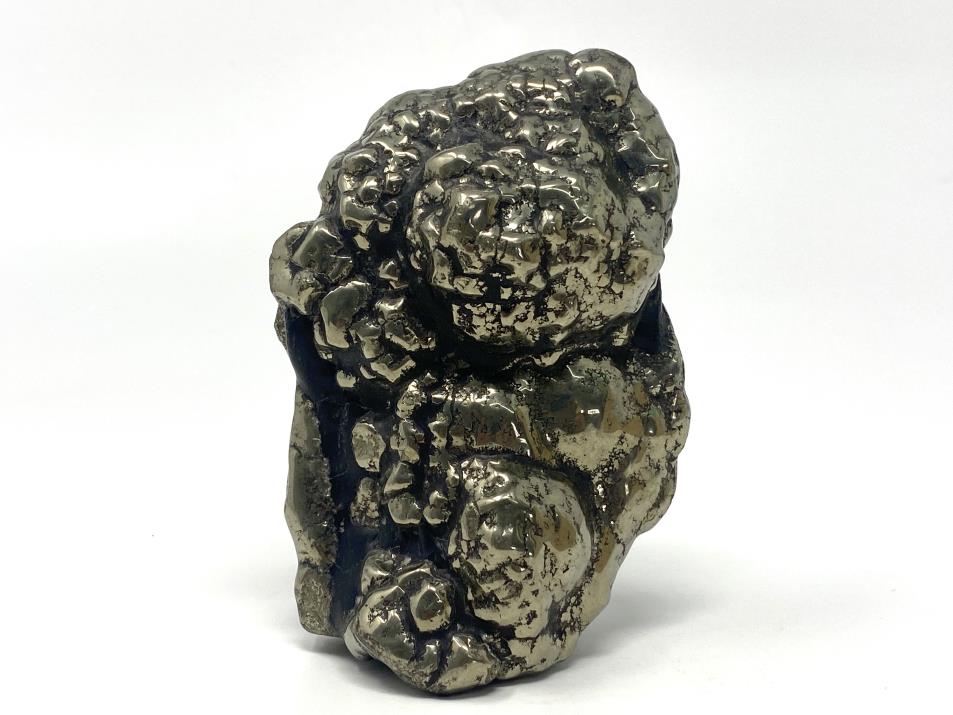 Hand-polished in our workshop sympathetically to their natural globular shape to maintain their high lustre, these natural Botryoidal Pyrite Specimens shimmer and shine with a warm, golden glow.

We hope that you have enjoyed learning all about one of our favourite minerals, and perhaps it is time for you to add some Pyrite to your own crystal collection!