At Madagascan Direct, we pride ourselves on providing a wide range of stones cut and polished into a wide variety of shapes. The wand shape is becoming perhaps one of our most popular varieties.

Some of our wands are cut and polished from stone by artisans in workshops we have linked to around the world, whilst other samples of our bespoke wands are hand-made from polished points in our UK workshop.

Historically, crystal wands have been a formative part of lore, myth, and legend. From wand-wielding wizards in fairy tales, to magic wands held by magicians and illusionists of the stage, to the mystical wands used for good deeds by fairies in children’s stories, wands have been a strong presence in popular culture throughout the ages.

Wands have also been a major part of certain religion and tradition: Wicca practitioners often craft their own wands, sometimes with crystals, to channel energy and cast spells.

Crystal wands are incredibly useful in energy work for crystal healers because they can direct healing energy to certain parts of the body to heal emotional and physical ailments associated with these body parts.

Crystal healers also use crystal wands to direct energy to chakra points. By touching the wand at chakra points, the user can cleanse and fuel chakras with energy. The user may feel intense vibrations from the energy transfer. Users are encouraged to hold the wand in their right hand and to ensure the wand is pointed towards the body to direct the energies inwards, as a wand pointed away from the body will draw energy away from the body.

At Madagascan Direct, we have two types of wands available for purchase. The first type, pointed wands, have a soft rounded base at one end and a sharp point at the tip of their other end. Pointed wands are often used in reflexology, where the point is placed against pressure points on the body to direct energy for healing.

The transparent, clear variety of Quartz is renowned for its range of powerful healing properties, and is purported to have a highly cleansing aura perfect for multi-purpose healing as it is associated with harmonising all chakras.

Our Clear Quartz wands are cut and then polished in our UK workshop from high-grade Quartz sourced from Antsirabe, Madagascar.

These wands are very special because when exposed to the light, rainbows shimmer and dance across and within the crystal in glorious spectra of colour. 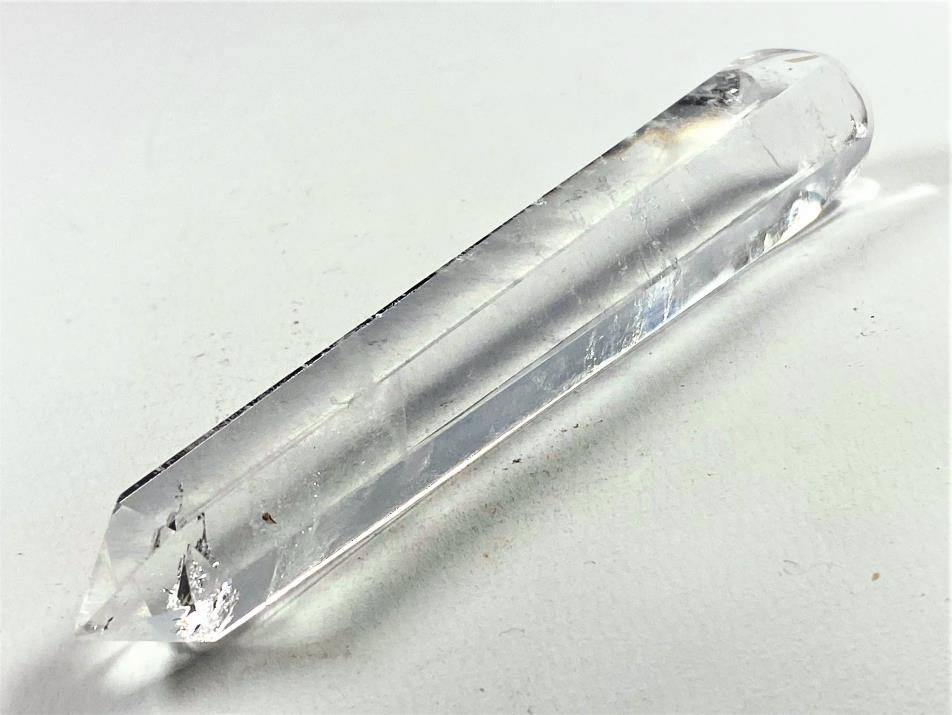 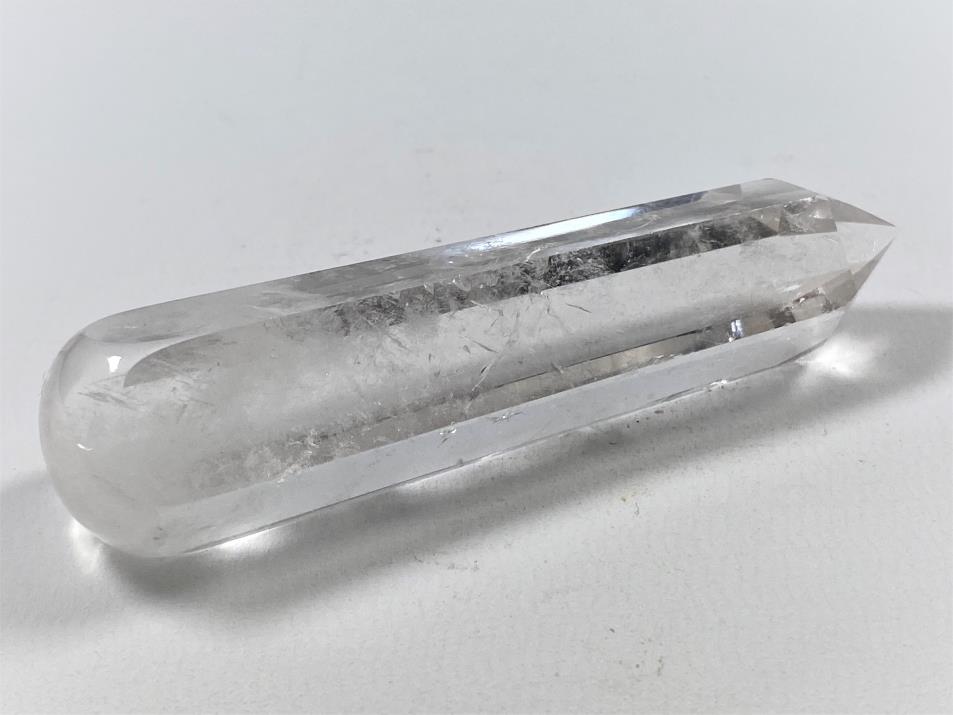 Associated with the Heart Chakra, these wands crafted from the Love Stone are believed to exude empathy and love with a calming and nurturing energy.

Madagascan Rose Quartz, of which our pieces were sourced from the Antsirabe region of Madagascar, is considered to be the best in the world.

Our Rose Quartz wands are hand-polished into their sleek shape in our UK workshop and have a lovely mellow pale-pink shade that is sure to entice you. 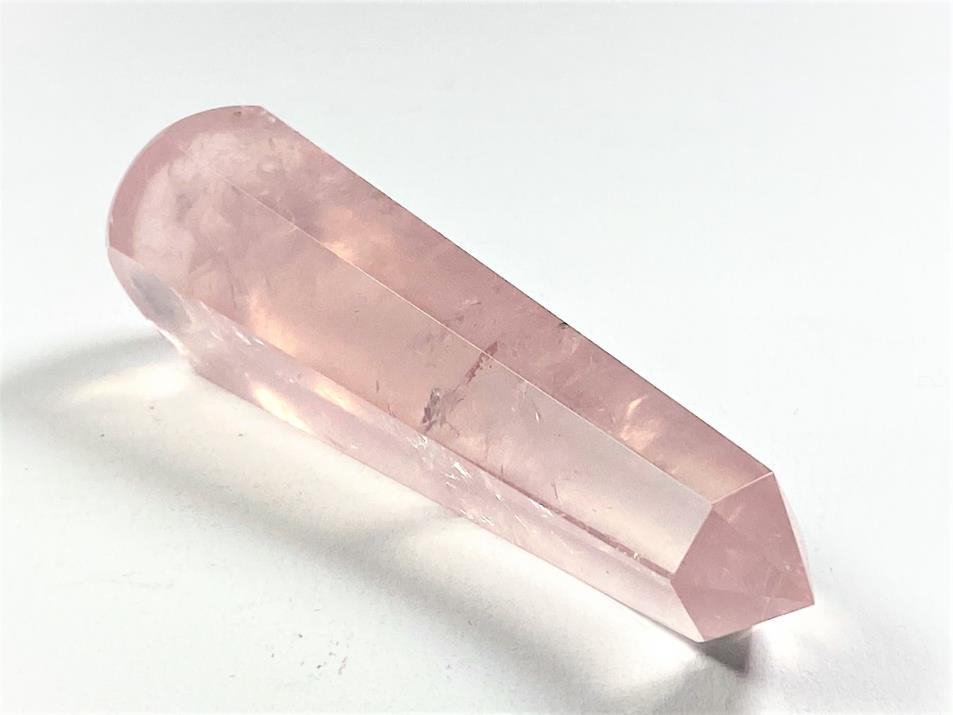 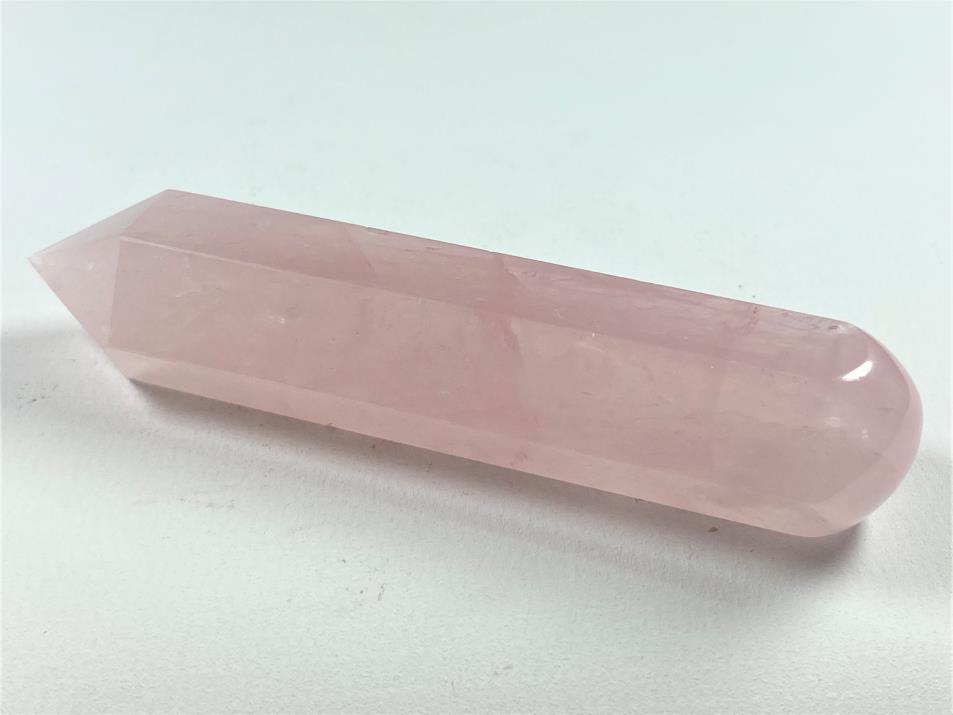 Due to its earthy colouring, this stone has a strong connection to the Earth and is believed to have a strong grounding effect; for this reason, it is associated with the Root Chakra.

The wands are hand-polished in our UK workshop and exhibit warm golden-brown and smoky grey-black tones when exposed to the light. 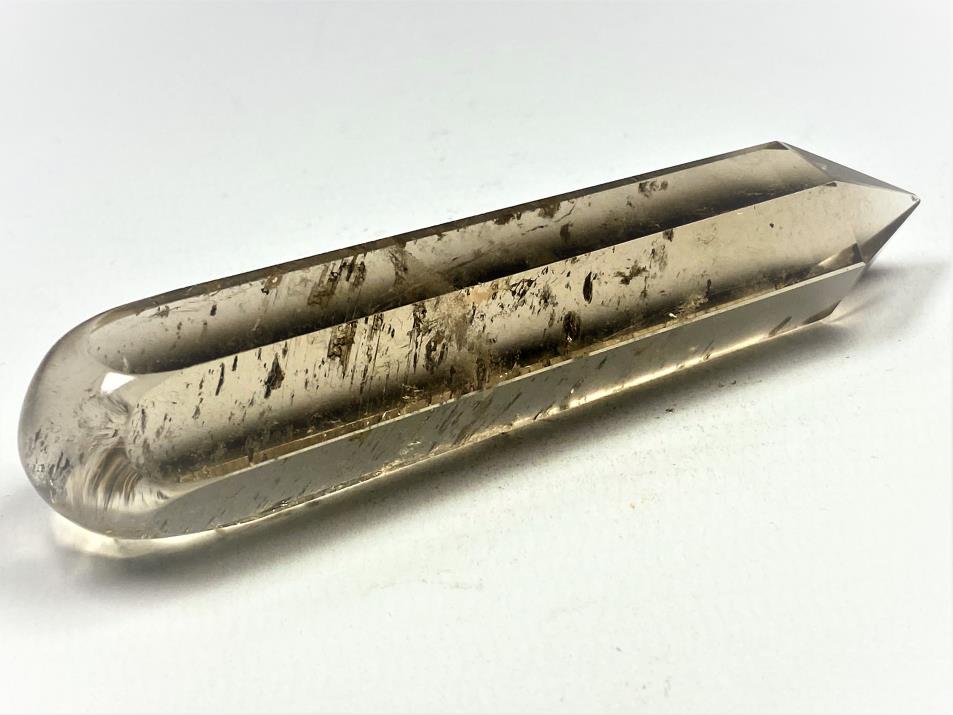 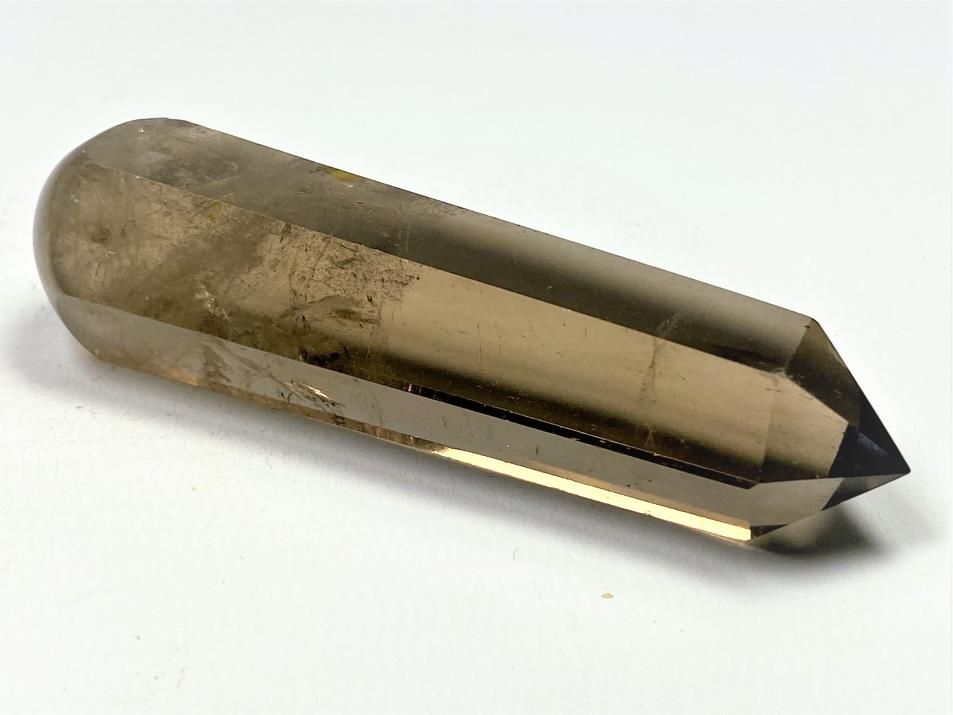 Rutilated Quartz combines the cleansing, multi-purpose properties of Clear Quartz with the added metaphysical boost from its rutile inclusions, which are said to lend even more properties to the stone and to improve one's awareness and connection to the world.

Rutilated Quartz sold by Madagascan Direct is sourced from Brazil and then hand-polished in our UK workshop to make bespoke wands.

The Quartz is very bright and vibrant, providing a window through which you can see into the crystal where there are fascinating silver and copper-coloured rutile needle inclusions enshrouded by the Clear Quartz.

Tourmalinated Quartz is a very popular stone and is believed by many crystal healers to help detoxify the body.

Tourmaline, otherwise known as Schorl, is said to have a grounding effect which creates a sense of inner peace in the user, complementing the clarity of mind gifted by the Clear Quartz which it lies within.

The Tourmaline inclusions mean that this stone has a highly protective energy that repels  and purifies negative energy, and it can be used on all chakras.

Like Rutilated Quartz, it has the cleansing, multi-purpose healing properties of Clear Quartz as well as added properties due to its inclusions.

Tourmalinated Quartz sold by Madagascan Direct is sourced from Brazil and hand-polished into bespoke wands in our UK workshop. The wands display wonderful clarity and sharp, vibrant black Tourmaline inclusions. 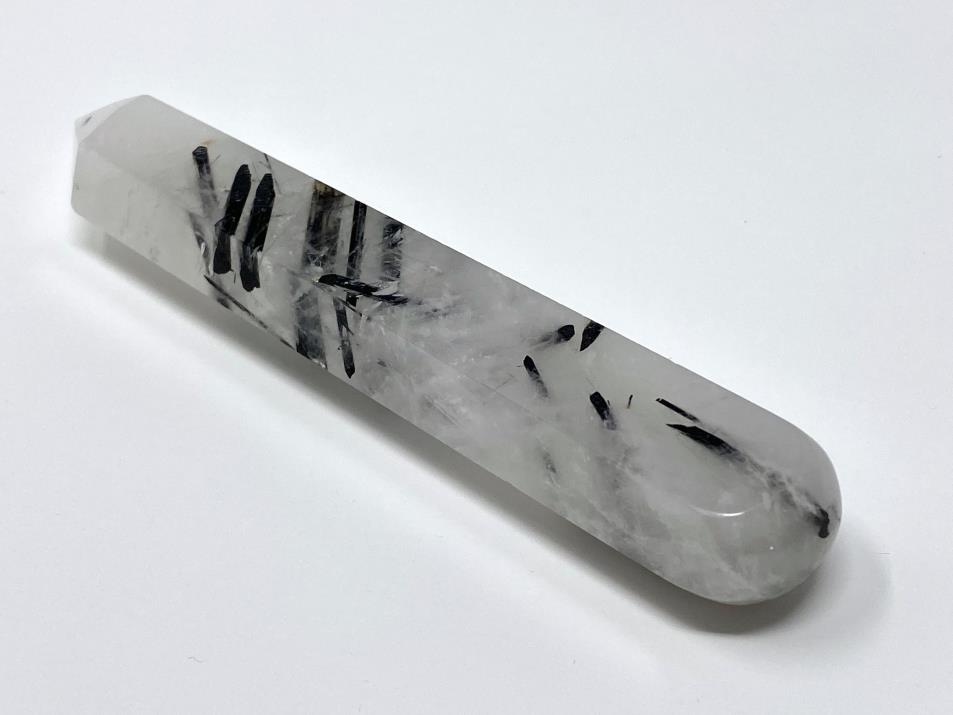 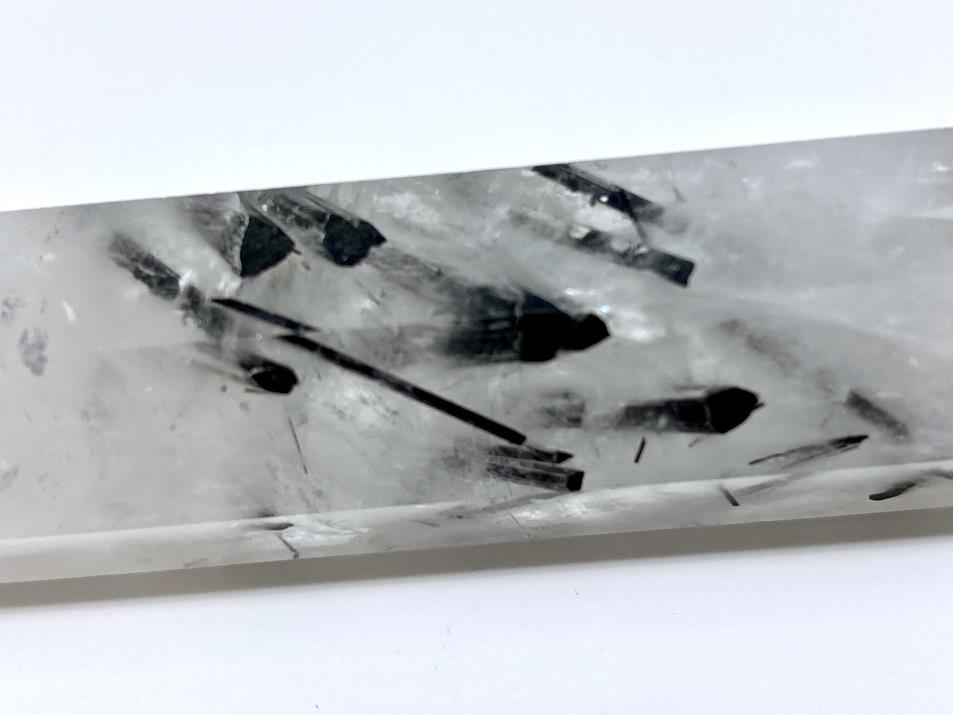 Amethyst, the purple form of Quartz, is revered in the crystal healing world.

Most useful with the Crown Chakra, Amethyst can help you directly connect to the higher spiritual realms during meditation, and helps guide the user's sense of intuition. It is frequently used during Reiki.

Our Amethyst is sourced from Brazil and hand-polished in our UK workshop to create bespoke wands. Some of our wands are pure Amethyst, whilst others are combined with Clear or Smoky Quartz: these alternative Quartz varieties often amplify the healing energies of the Amethyst. 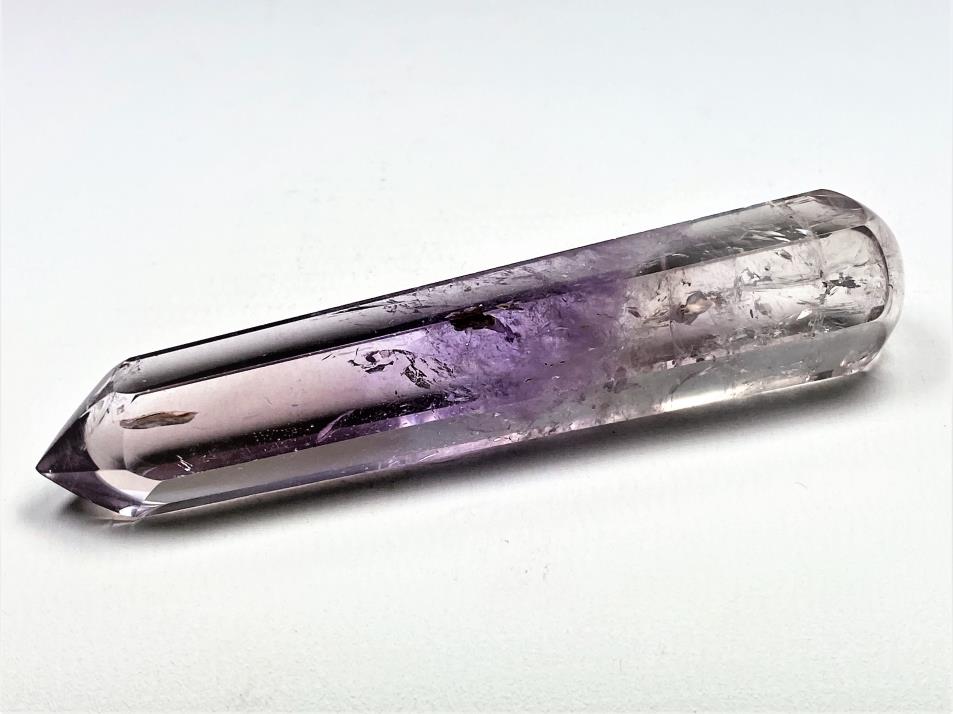 Fluorite generally tends to have a stabilising and grounding energy, and due to its multitude of colours, is associated with multiple chakras.

Yellow Fluorite is purported to balance one's energy and foster a sense of calm in your life, and is particularly associated with the Solar Plexus Chakra.

It is also renowned for its intuition-enhancing properties, and can improve one's wisdom; Yellow Fluorite can also be used to aid connection to the spiritual realms and enhance creativity

At Madagascan Direct, we source Yellow Fluorite from China and polish the stone into wand shapes in our UK workshop.

Our Yellow Fluorite wands display a base of ethereal gold adorned with subtle dark purple stripes. Once illuminated, the stone's unique golden shimmer comes to life, distinguishing it from other forms of Fluorite. 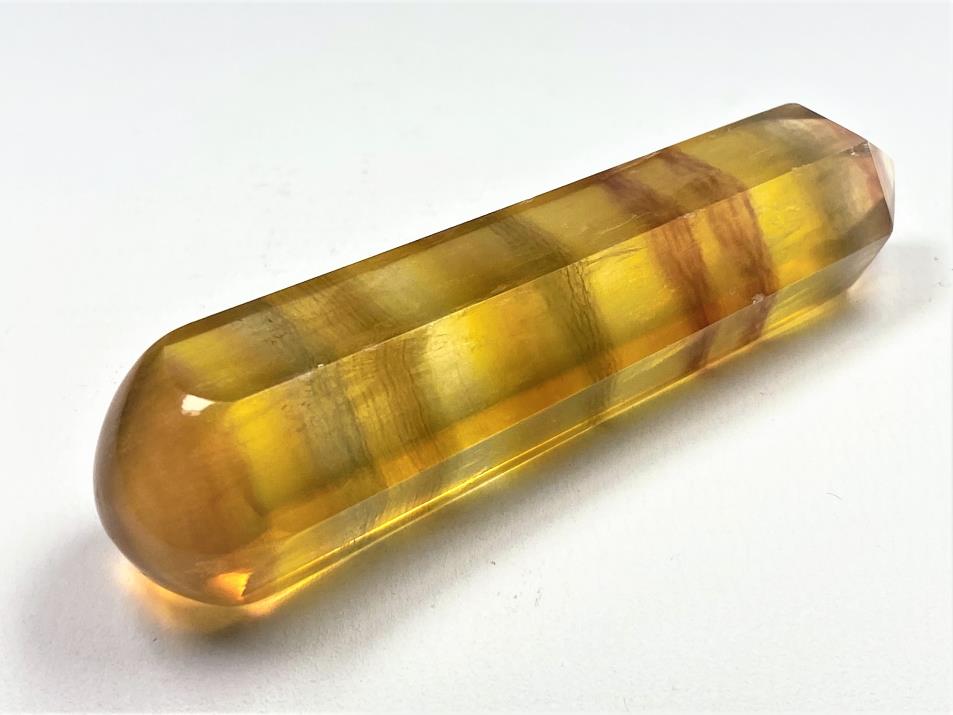 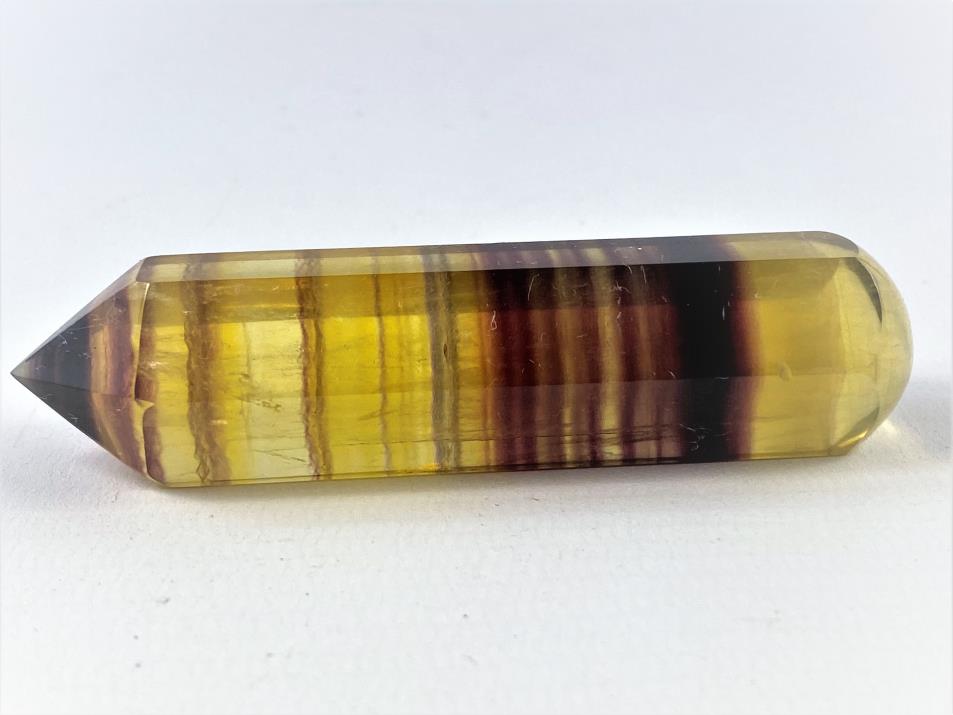 This stunning feldspar sourced from Madagascar is heavily associated with the Root Chakra and thus has a strong grounding effect which invites the repulsion of negative energies.

It is also associated with the Sacral Chakra, and inspires passion, energy, and joy in life, helping its user to gain courage. Black Moonstone wands sold by Madagascan Direct display a deep, rich black colour with cream banding. 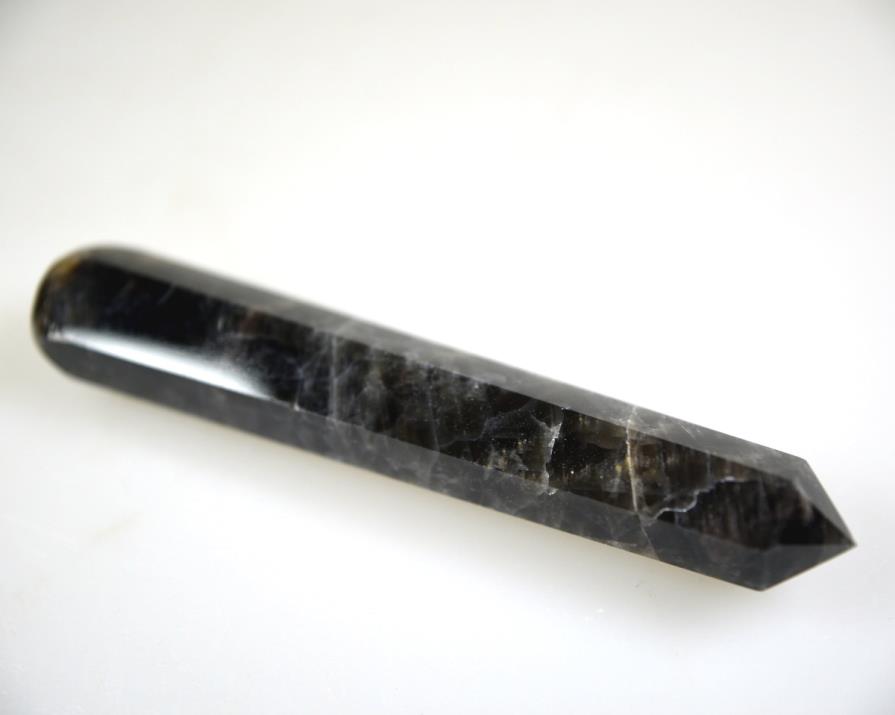 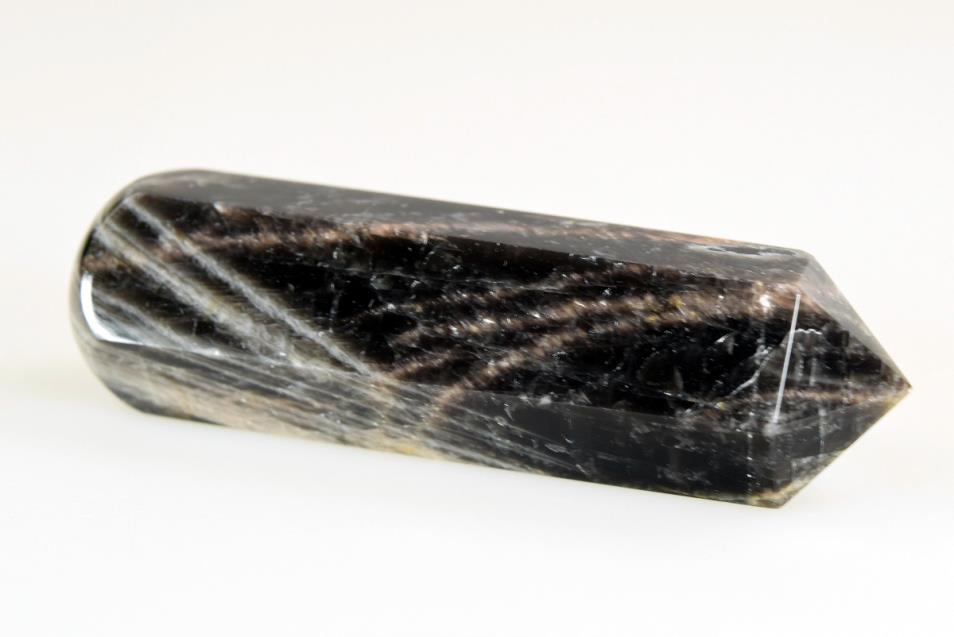 This stone is said to activate energy, rejuvenate and balance one's emotions, and inspire hope. Green Apatite is also associated with the Third Eye Chakra and can gift its user with improved wisdom.

Shining with a lovely dark emerald colour, our Green Apatite wands inspire a connection with the Earth. 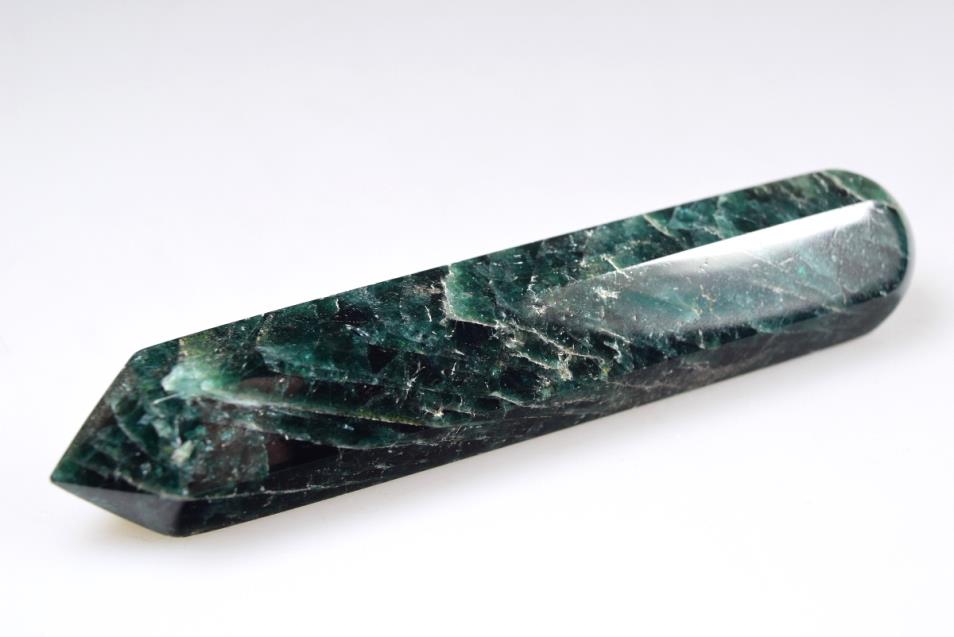 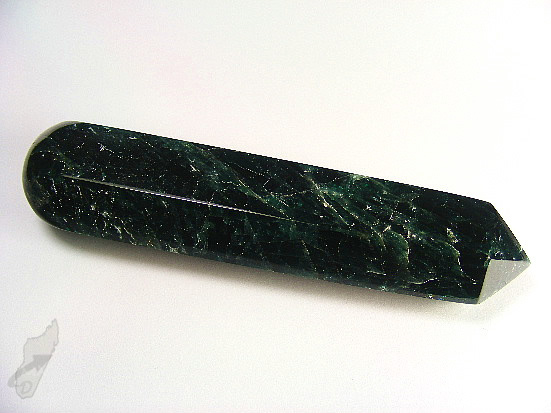 The other type of wand available from Madagascan Direct is the massage wand. These wands have a soft rounded base at each of its ends, making them feel tactile and grounding to hold in the hand. Massage wands are used to massage the body, releasing tension, enabling rejuvenation, and infusing the body with healing energy.

Christened as the Counsellor’s Stone, this special Jasper is believed to have powerful metaphysical properties that can tame anger and primal energy, gifting a sense of calm and balance to the user. It is also believed to sharpen the senses and heal a number of ailments by banishing negativity completely from the body, and a strong grounding element. King Cobra Jasper massage wands can be used in relaxation massages to infuse a sense of balance into the patient. 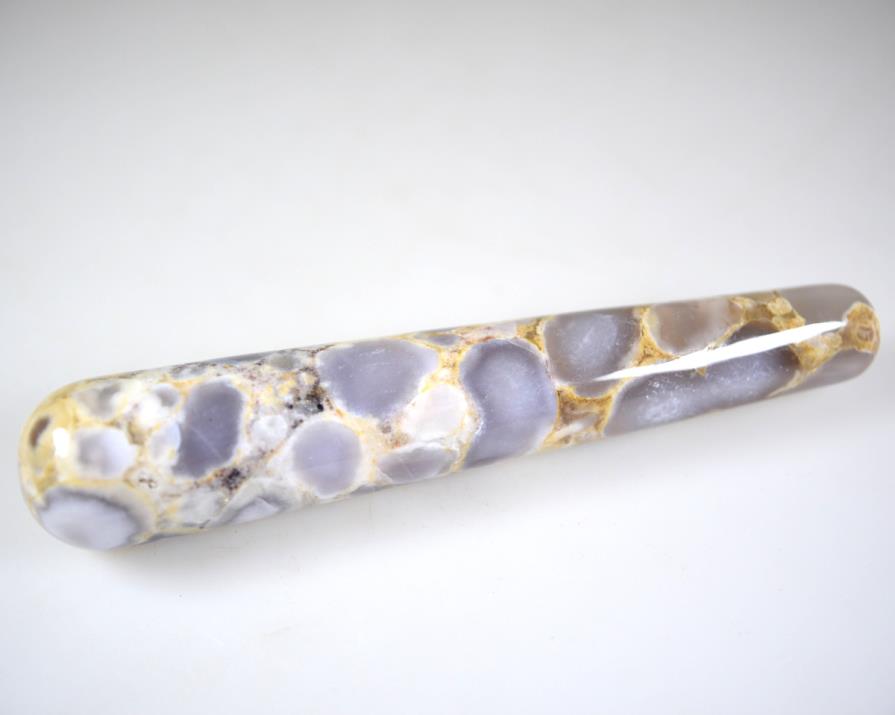 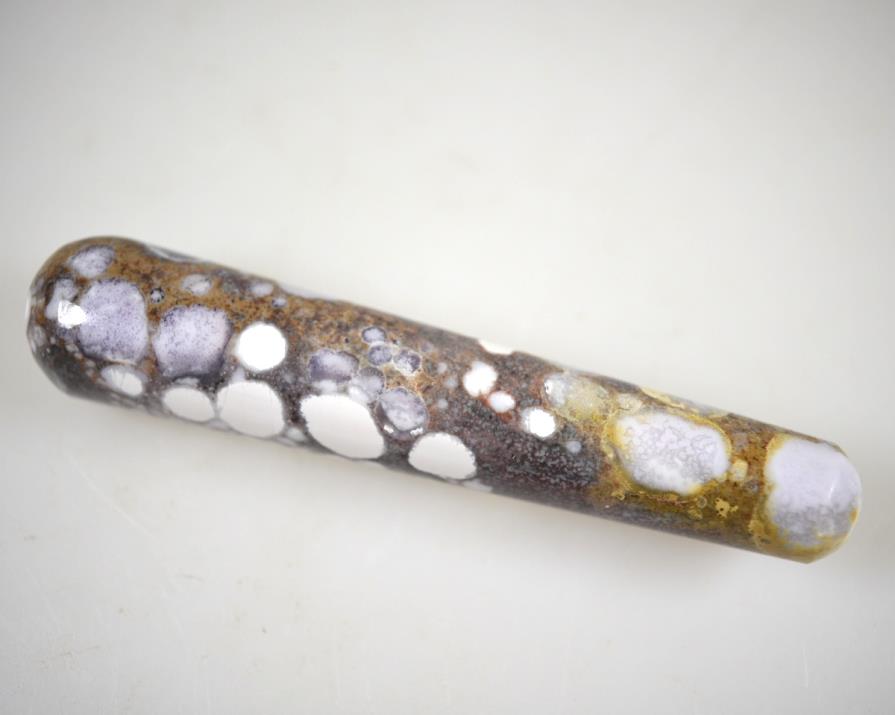 Associated with the throat and heart chakras, many crystal healers believe Ruby in Kyanite stones help people to speak the truth straight from their hearts, and therefore can be used to help resolve arguments. The stone is also associated with astral projection, fitting for a crystal with such a galactic appearance.

Ruby in Kyanite massage wands from Madagascan Direct are sourced from India and consist mainly of deep blue Kyanite, with some elements of Ruby within its crystal matrix. Kyanite is an exotic, uncommon rock rich in aluminium, and is famed for its gorgeous ocean blue hues. Many users find the colour soothing due to its resemblance to the turquoise and aquamarine tones of the sea, and in fact this mineral is renowned for having a calming aura. The mesmerising Ruby inclusions introduce clouds of red within the swirls and whirls of stunning colours. Ruby is purported to have an energising influence on its user. Thus, this stone is believed to both nurture and calm the user as well as stimulate passion. 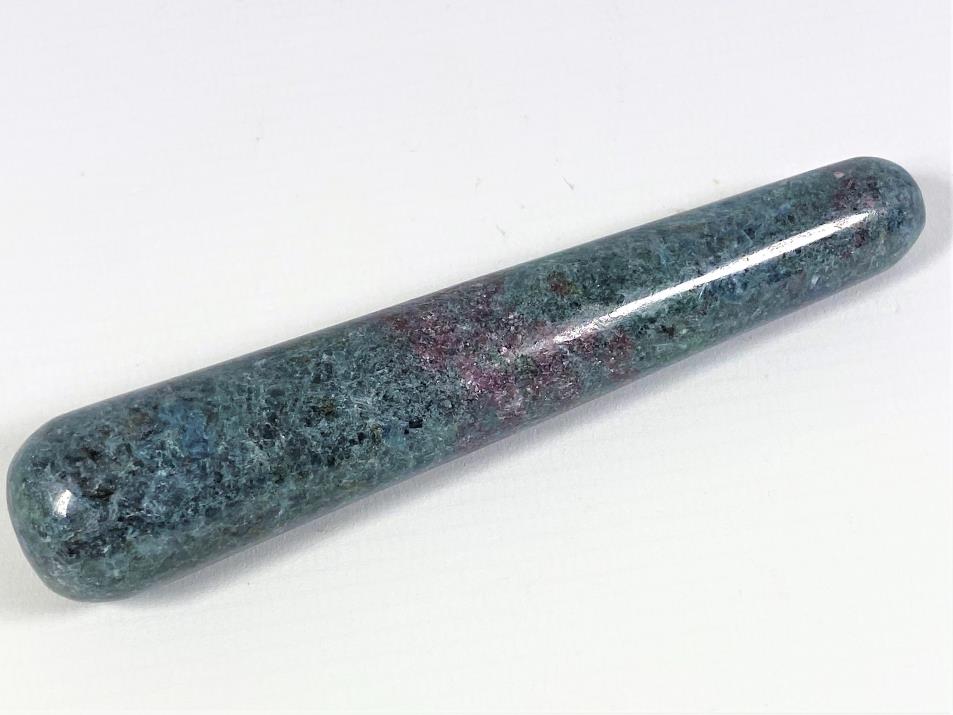 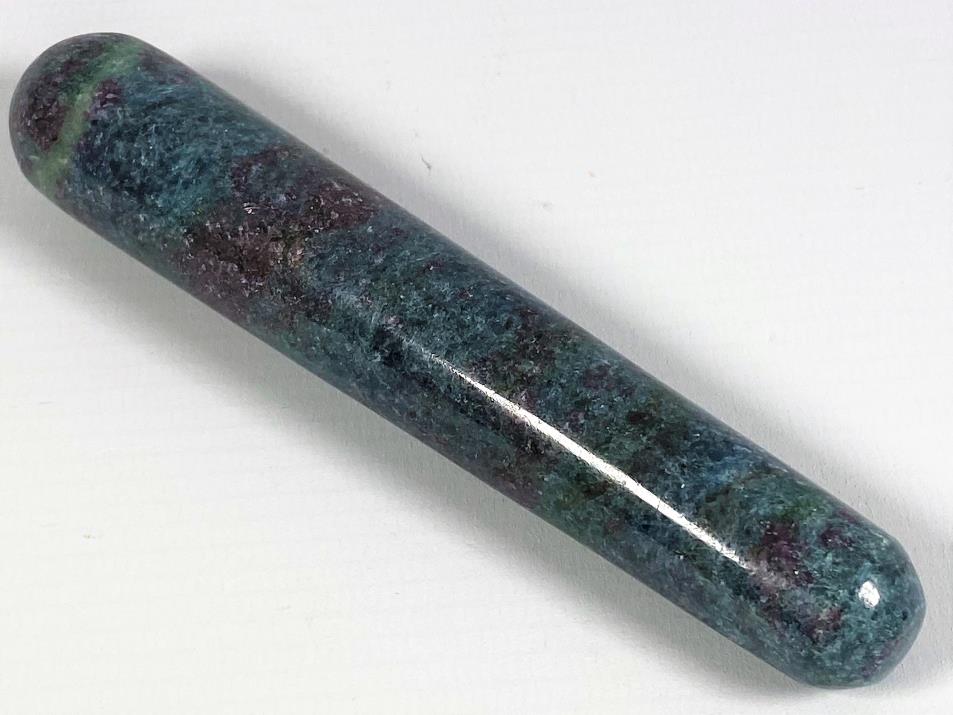 Indigo Gabbro is a very special, spiritual stone otherwise known as Mystic Merlinite and is believed to encourage wisdom and courage in its user. This stunning stone is said to enhance one's magical and psychic abilities, such as clairvoyancy, and to aid connection with spirit realms. In crystal healing, it can be used to help the patient recall and reconcile with difficult elements of their past with wisdom and bravery.

Our Indigo Gabbro massage wands at Madagascan Direct are sourced from Madagascar and display a magical contrast between dreamy swirls of lilac and black. Indigo Gabbro's unique, colourful pattern and gorgeous purple hues make it a highly aesthetically pleasing object. 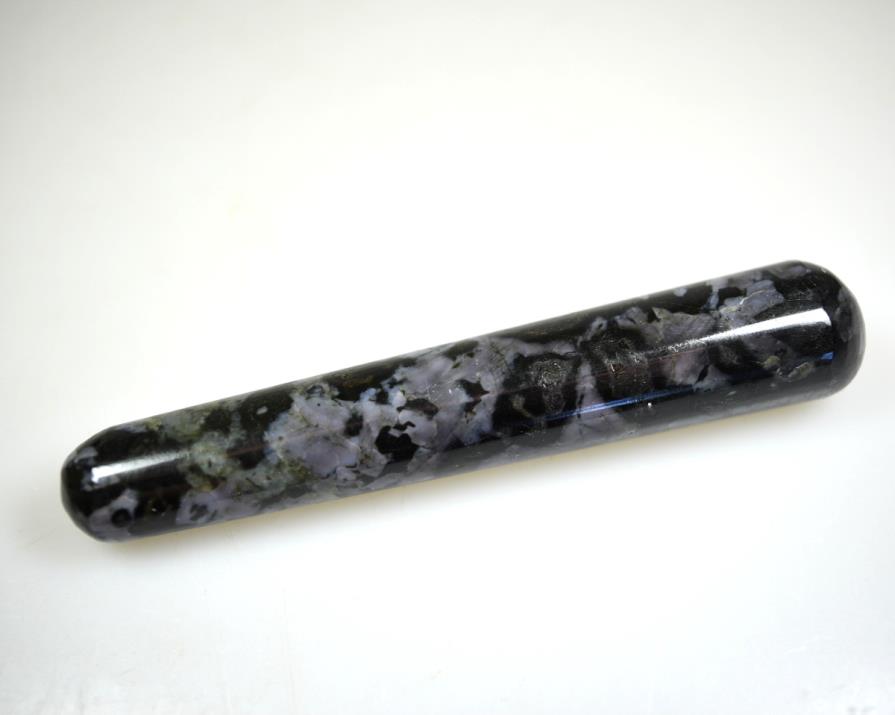 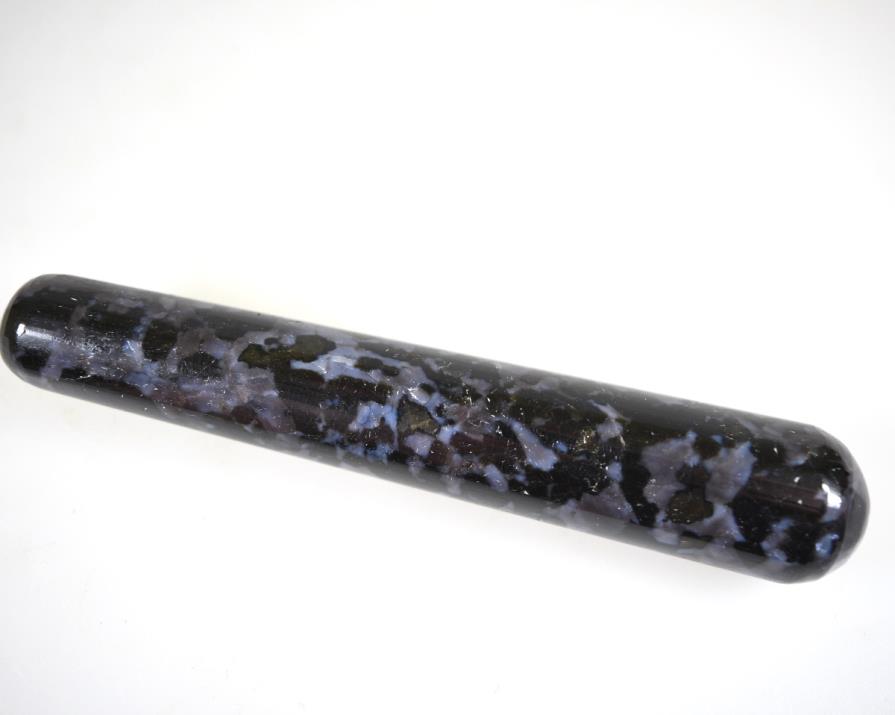 Moss Agate is a gorgeous stone that exudes the feel of nature due to its green dendritic mineral inclusions of manganese and iron. For this reason, Moss Agate is believed to be highly symbolic of growth and nourishment, and therefore is regularly used by crystal healers for its reported curative properties. Sometimes referred to as a Stone of Prosperity, this crystal is believed to help nurture the user's relationships and personal growth. Moss Agate is most strongly associated with the Root Chakra, due to its connection to Mother Earth, and the heart chakra. 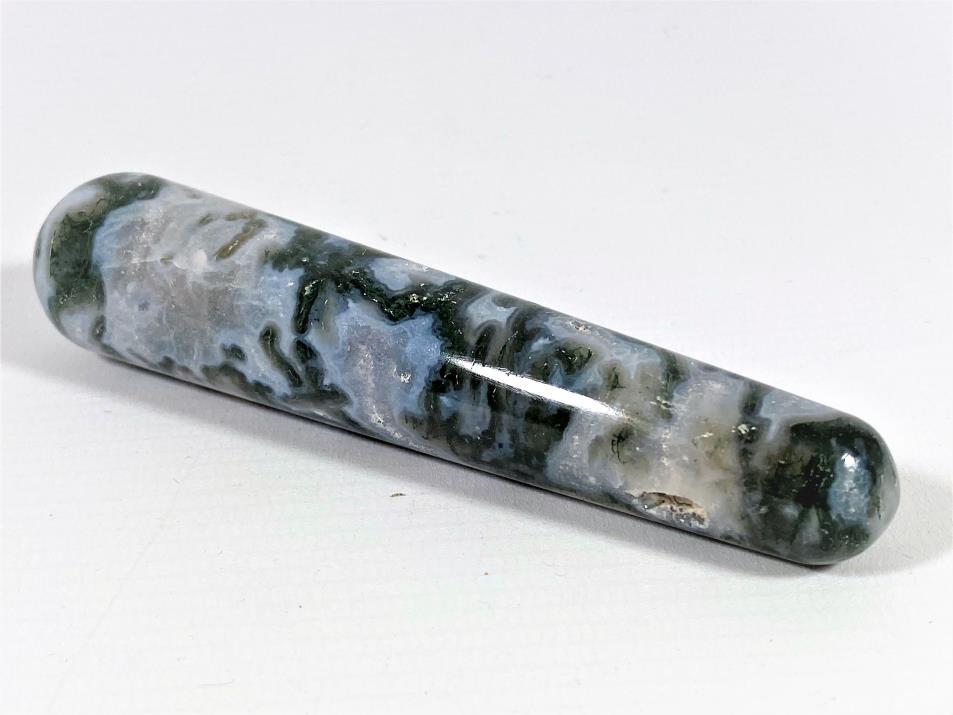 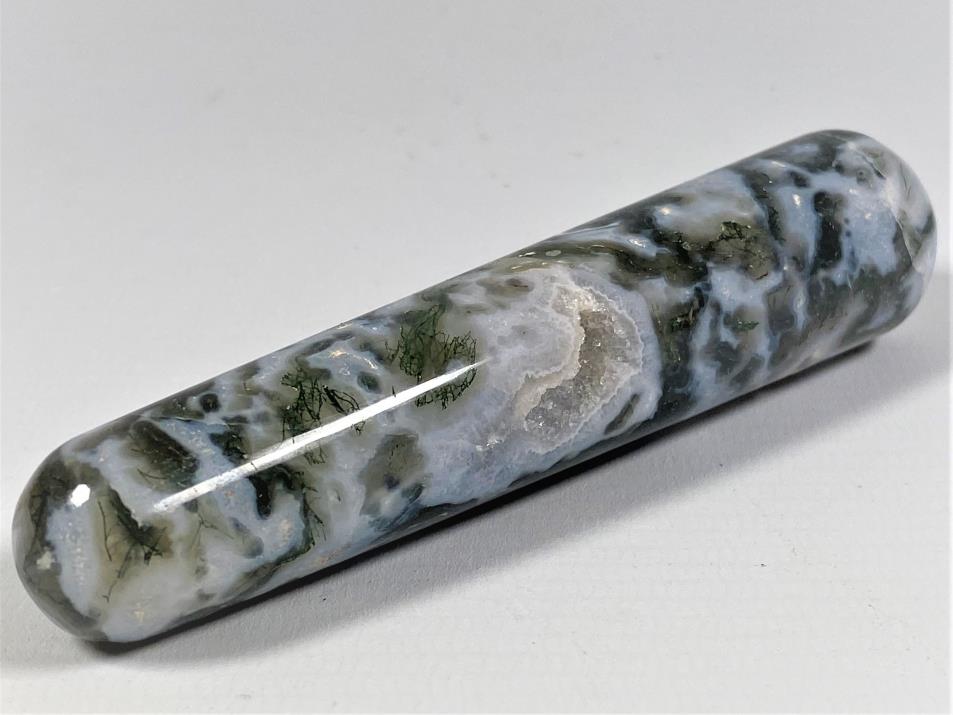 Clear Quartz and Rose Quartz Massage WandsRose Quartz and Clear Quartz massage wands sold by Madagascan Direct have all the benefits of the pointed wands described earlier, as well as the added benefit of being useful for giving calming massages. 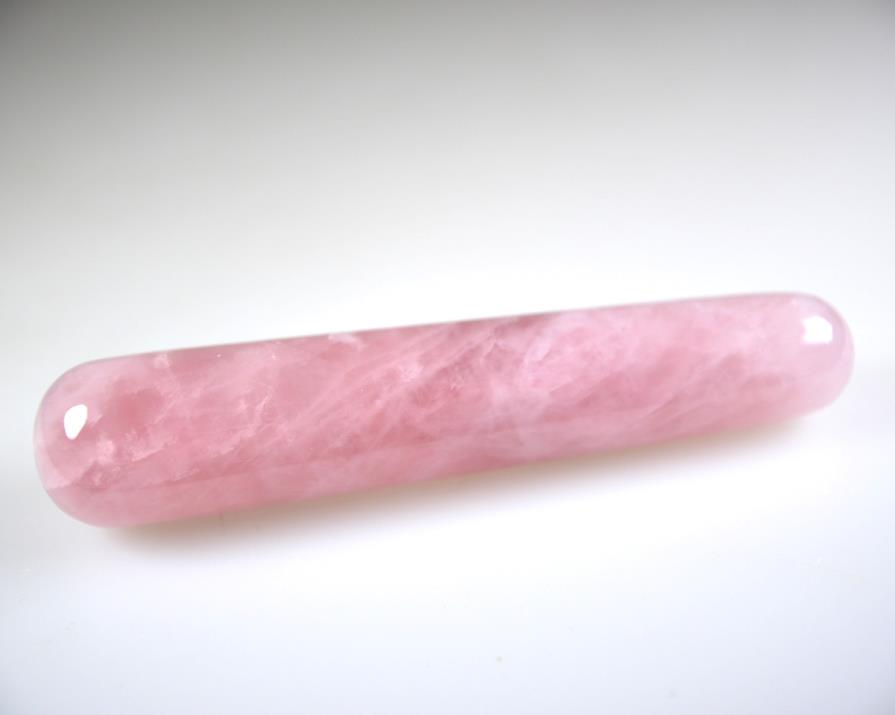 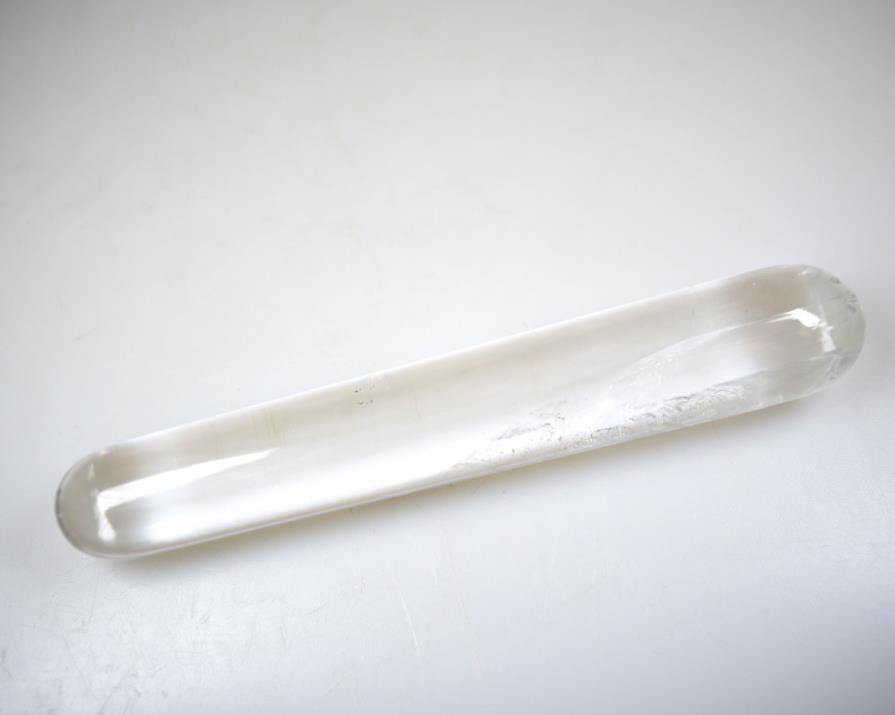 Your Journey with Crystal Wands

We hope you have found this blog useful, whether you are beginning your journey in crystal healing using crystal wands, or if you simply like the sleek shape and tactile feel of a crystal cut and polished into a wand. Please feel free to peruse our extensive catalogue of crystal wands, both pointed wands and massage wands, at Madagascan Direct.