Throughout history, fossils have been a prized material in the art of jewellery making. From trilobites and 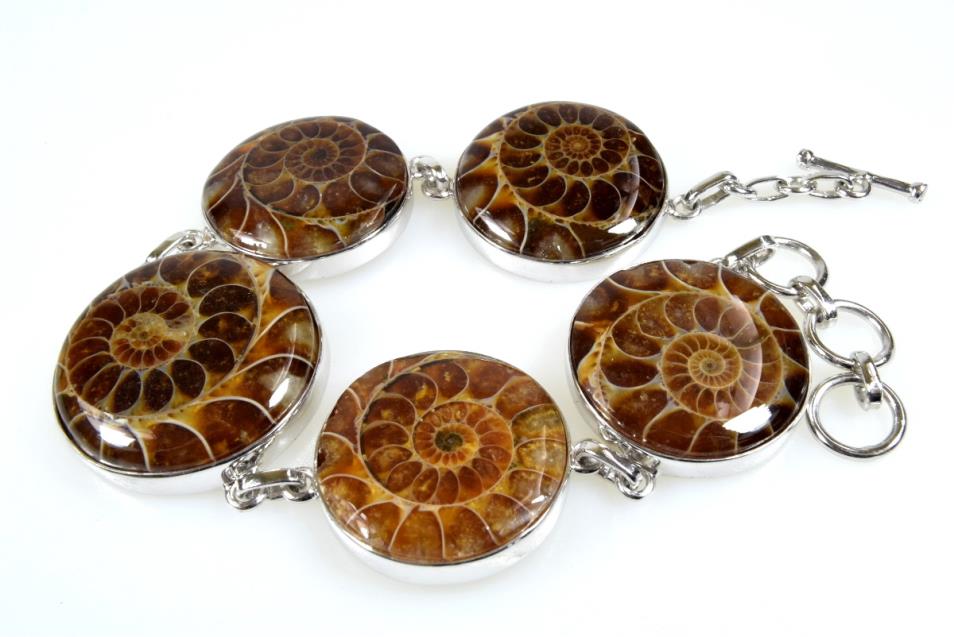 ammonites, to dinosaur bones and prehistoric Megalodon shark teeth, the prospect of wearing the remains of creatures that lived millions of years ago has intrigued people for generations.

Coprolite, the term for fossilised dung, is a popular choice for jewellery because these fossils may be naturally agatised, and consequently they display an array of bright colours. These gorgeous colours are emphasised further when the coprolite, like many fossils destined for use in jewellery, is cut into sleek cabochon shapes. Ammolite an iridescent gem formed from ammonite shells, is famous in Blackfoot myth for being a ‘buffalo stone’, and is often 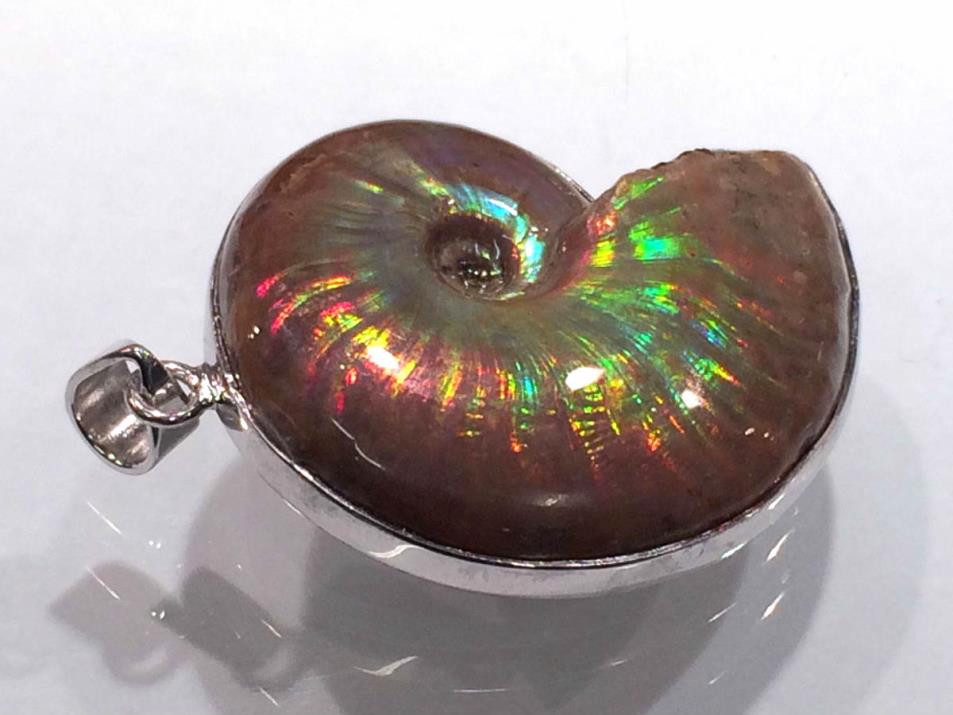 carved in a similar shape to coprolite.  Dinosaur bone may also be agatised, and remains enduringly popular.

Ranging in age from over 200 million years old to the comparably youthful 65 million years old (when the dinosaurs became extinct during the Cretaceous-Tertiary mass extinction event), dinosaur bone is an ancient treasure often found in areas of the USA such as desert-filled Utah. Dinosaur bones, like all fossils, have been preserved by processes of petrification. After death, the dinosaur was buried under many layers of sediment, stopping oxygen from reaching the remains; therefore decomposition could not occur and the bones began the preservation process. After this, many processes leading to the final fossil product could have occurred, one of the most common being the event of 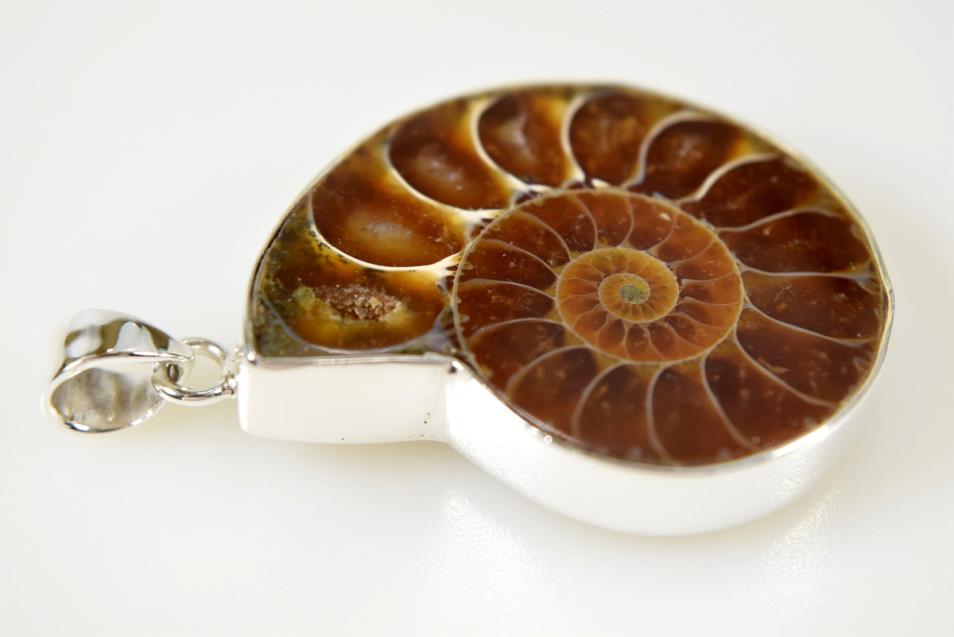 water flowing through the bone cavities, depositing the minerals carried in its flow within the bone. These minerals, most frequently identified as silica and calcite, replace the original dinosaur minerals and cause the rich colours associated with fossilised dinosaur bone.

A famous type of dinosaur bone jewellery is agatised bone jewellery. The bone has already been fossilised, usually via calcite replacements, and its minerals are then replaced again millions of years later with agate, a mineral made from silicon dioxide. Sometimes it may instead be replaced with jasper. The bone can then be cut into cabochon pendants and worn as a necklace, showing off the bands of colour shining on the fossil’s surface. Dinosaur bone jewellery does not only have 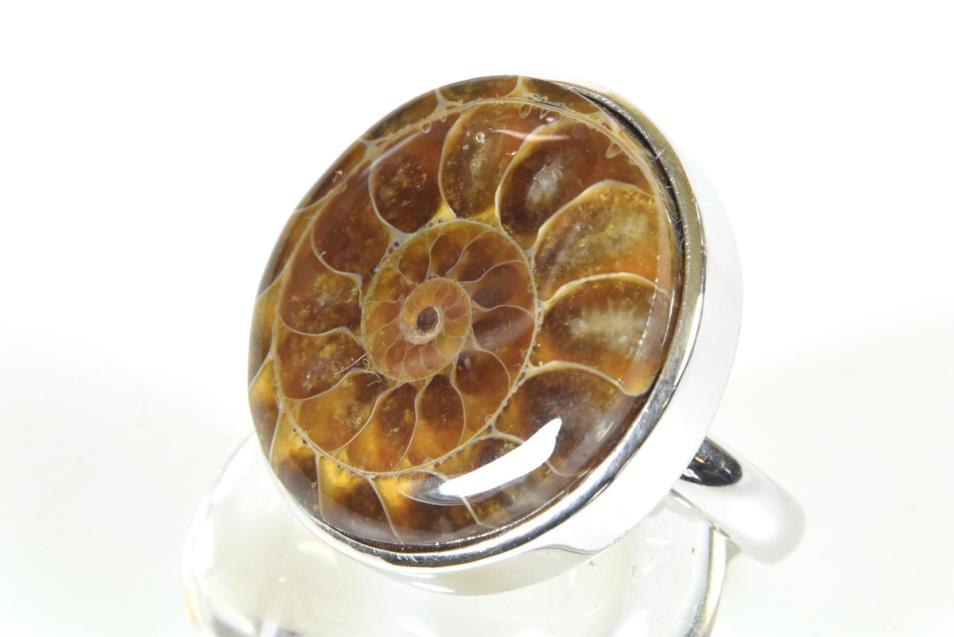 significant aesthetic and historical value, but is reputed to have many metaphysical properties. These include the power to improve energy levels and the ability to communicate, as well as to decrease anxiety. Sauropod dinosaurs ate the leaves growing on monkey puzzle trees, trees which are themselves immortalised as fossilised wood, available to buy from Madagascan Direct

At Madagascan Direct, we predominantly sell ammonite-based jewellery. Using the iridescent shells of the finest` ammonites sourced from Madagascar’s Mahajanga region, which date from the Cretaceous period (120 million years ago), we hand-craft beautiful rings, bracelets and pendants. Opalescent ammonites from Madagascar are often referred to as ammolite, a gemstone which when exposed to light shines with deep wine 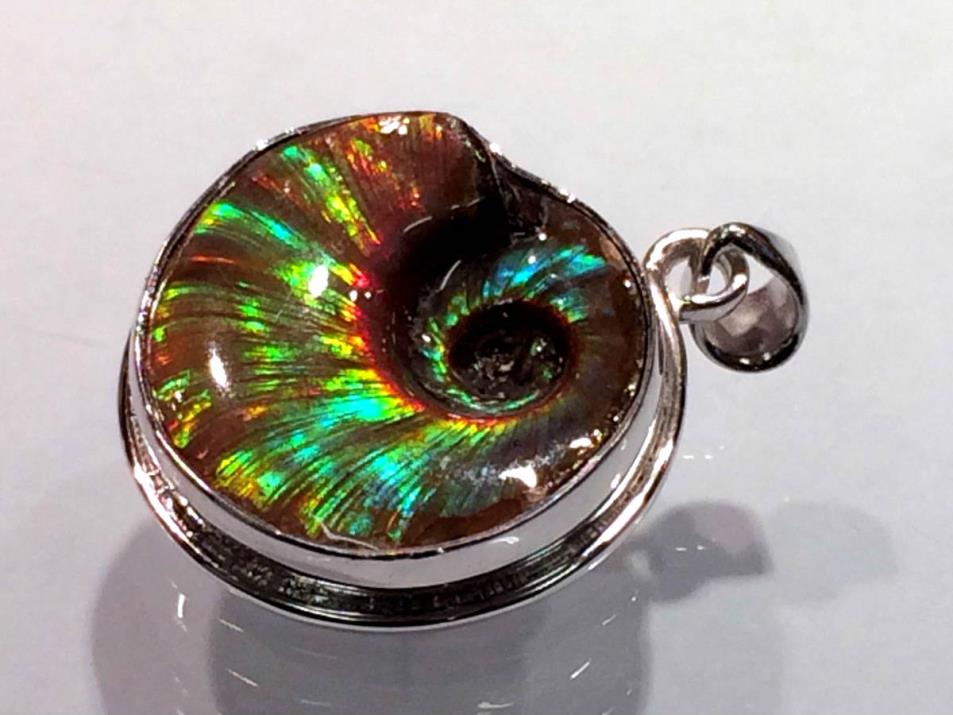 reds and shimmering blue-greens. Colours from every part of the spectrum can be observed in these gems. Similarly, ammonite halves in pendants exhibit the gorgeous hues of their calcite chambers. In other parts of the world such as France and Russia, and very famously Lyme Regis in South West England, the ammonite chambers have been replaced with iron pyrite during the fossilisation process, but in Madagascar most ammonite chambers are filled with calcite (although there are some traces of pyrite in Madagascan goods). All of
our pieces are hand-polished to ensure their high quality, and many pieces come with glass topped display boxes. The silver jewellery is rhodium-plated to prevent tarnishing. Coming soon, we have cuff links made from ammonite halves, and beautiful fossil wood pendants, which derive from the 248 million years old monkey puzzle tree.